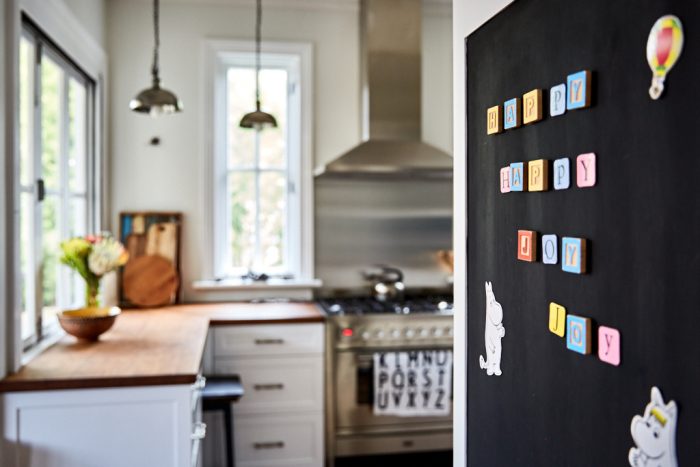 Being an interior designer in Balmain it is only logical that our house featured in an article in a Finnish newspaper’s “Home” edition some time back. For the English speakers amongst us, a translation follows below. I’ve tried to stick to the original story while translating – quite cringingly sometimes. A piece of lost Carelia* in the heart of Sydney

Finnish Sari Munro lives in Inner Sydney in a house that dates back to the Victorian era. “I have brought my grandparents chairs here”, she says.

The winding street is aligned with small houses nearly touching each other. Balmain is not far from the centre of Sydney, Australia’s biggest city, but the atmosphere there is cosy. A century ago thousands of poor workers filled the streets in the shadow of a smoky coal mine. Today the area is populated by families and couples who appreciate the calm atmosphere near the city.

Sari Munro, a Finnish interior designer, also lives in Balmain with her husband Andrew and their two small daughters. The Munro family fell in love with the historic ambiance of the area and the little worker’s cottage from 1902. Although the old house needed renovating, the Munros ended up moving in – first renting and after a while they bought it.

Many of the houses in the area are from the Victorian era. Also the front part of Sari’s four bedroom house has features from that period when decorative and beautiful details were part of regular building principles. A great example is the old fireplace – to the renovators’ surprise the original beautiful tiles were recovered underneath newer layers.

Little by little the renovation continued and the house was extended with a new part containing a kitchen, dining room, library, bathroom and upstairs. The Munros even built a little Finnish sauna to wash away any home sickness. The sauna is connected to a tiny open courtyard, for cooling down under the starry sky.

Scandinavian style is visible in the home. The kitchen is sleek and light. Nordic roots are important to Sari and she respects them with lightness and scattering small Finnish details within the decoration.

– “I have brought even bigger pieces of furniture with me from Finland. My grandparents’ old dining set and sideboard are my treasures. I recently flew back with my grandparents old stools from Sortavala*, and of course we have Moomin cups in the kitchen”, she says.

Sari studied Interior Design in addition to her day job as a Project Manager, and graduated in 2009. Her house in Balmain was her first big, and lovingly thought of, exercise. Sari used to live in Brazil for three years and from there she acquired a more relaxed style and the courage to use bold colours in decoration. The big lines are light but with textiles Sari lets the colours loose.

Balmain is a conservation area and there are strict rules about keeping the streetscape and facades intact. However, the extension was approved and the family got more living space and the parents their own retreat with en-suite upstairs. The little girls have their own cute, little empires downstairs.

Sari’s and her husband’s jobs demand time and dedication – in Sydney people are used to working hard. It is important to balance life with things that charge up the energy levels. For Sari it is the beautiful home and the moments spent with family and friends. “I like spending time at home. We cook food, heat up the sauna and just hang around. The house has been decorated so that life is easy and cosy, and just enough Finnish.”

So there. 10 points to the first one to spot a picture which is not from our house!

*) A brief explanation on the title. Sortavala was a town in Carelia, a lush farming area in South East Finland, which was lost to the Soviet Union in the WW2. My ancestors had been living in that area at least from the 17th Century, until they got evacuated and lost all their belongings during the war. Hence filling the suitcases with old wobbly stools…

Have a nice week!